Based on the ancient text Natya Shastra, Bharata Natyam is one of the most ancient Indian classical dance forms. Developed and nurtured in the temples of South India, it is deeply spiritual and steeped in the religion, philosophy and traditions of India. Yet, as a living art form it continues to grow and evolve, within the rich but well-defined parameters of technique that govern it. Linear geometrical patterns, perfect alignment of body, eloquent expressions, and precision of footwork to intricate rhythms are the hallmarks of this dance. 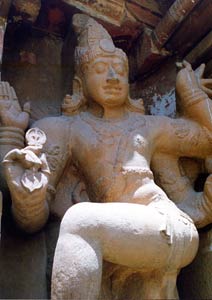 The dance form we know as Bharata Natyam today had its origins in Sadir Natyam, also known by the names of Daasi Attam, Chinna Mélam, or simply, Sadir. Earliest references to the dance are found in the literature of South India during the Sangam period spanning from c. 3rd century BC to c. 4th century AD. The dance form appears in the Tamil epics Silapathikaram and Manimekhalai, in which one of the main characters, Madhavi, is a highly accomplished dancer. The Silappadikaram is a mine of information on ancient Tamil culture and society, where the arts of music and dance were highly developed and played major roles in society.

After the tenth century, Bharata Natyam seems to have developed chiefly in the Southern region of Tamil Nadu. The Chola and Pallava kings who ruled this region were great patrons of the art. The accuracy with which dance poses or karanas are depicted on the Brihadeshwara Temple bears proof of their understanding of the laws of dance movements.

However, Bharata Natyam crystallized into its present form during the nineteenth century. This was primarily due to the remarkable contributions of the four brothers from Thanjavur who lived in the courts of the Maratha King Sarfoji Maharaj. Known as the Tanjore Quartet, they brought about far-reaching changes in the technique, format and the style of presentation, conceiving the dance as a narration by the dancer rather than a performance of a role.

Dance developed to its height during these years because the artistic climate gave the much needed impetus to its growth. These were the times when Tyagaraja, Muthuswamy Dikshitar and Shyama Shastri, the Trinity of Carnatic music poured out their unequaled compositions. Their vast body of musical work became the bedrock on which the Bharata Natyam dance compositions were built and developed. This artistic milieu combined with vast royal and temple patronage enabled the dance to flourish. 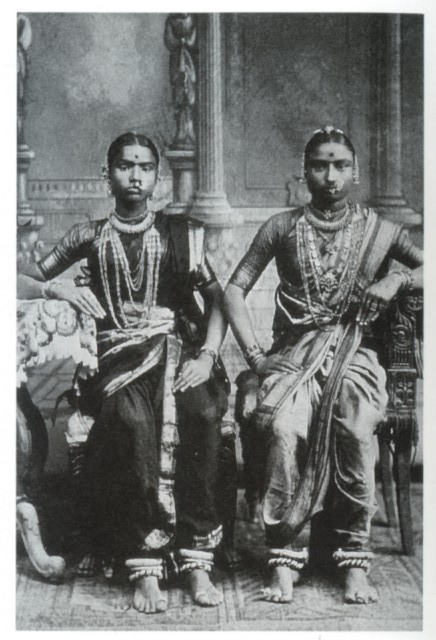 The role of the devadasi in the history and preservation of the dance cannot be overstated. The devadasi was entrusted with preserving and upholding this magnificent tradition of dance which was then called Dasi attam. Dance was part of daily worship in the temples. The royal houses were generous patrons of the temple and the devadasi trained in the arts of music, dance, painting, literature and poetry, gained special status as temple and court dancer and became a powerful player in society.

However, the devadasi tradition came under much duress with the coming of the British rule. The very concept of dance as worship was anathema to the Victorian morality that was on the rise. Unable to fathom the critical role of the devadasi in the social and cultural fabric of the country, the foreign rulers dealt severe blows to the devadasi tradition and thence to dance.

But fortunately, by the beginning of the twentieth century, there began a parallel movement to restore the dance to its former magnificence. People like E. Krishna Iyer worked tirelessly to revive the dance tradition. Rukmini Devi, the first great dancer not to belong to the devadasi tradition brought about major reforms in content and presentation.

Today Bharata Natyam is vibrant and alive all over the world. Dedicated and talented dancers are researching and resurrecting movements thought to be long lost. Others are experimenting, collaborating and incorporating movements from other dance styles. Still others are adapting the traditional dance language to a more contemporary one in tune with the modern world.

At Leela School of Dance, the history of Bharata Natyam meets the future as this ancient art form is studied, practiced and performed.

The philosopher’s soul dwells in his head
The poet’s in his heart;
The singer’s soul lingers about his throat,
But the soul of the dancer abides in all his body. 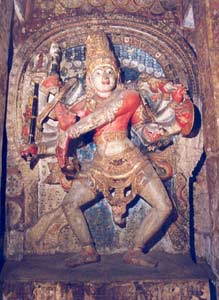 A Bharata Natyam performance is a visual representation and interpretation of all the arts of India, of music and rhythm, painting and sculpture, literature and poetry. It is a mirror of the Universe reflected through a series of emotional states. It is the final worship.

The philosophy on which Bharata Natyam is based acknowledges the oneness of all creation, and sees nature as the all-pervading reality. Everything we do can be a means of realizing that reality or Truth. The human body was viewed as the perfect instrument to accomplish this and was treated and prepared for this.

Governed by the tenets laid down by two scholarly works, Natya Shastra and Abhinaya Darpanam, Bharata Natyam was created to balance rhythmic virtuosity with emotional interpretations.

Given this, the two primary aspects of Bharata Natyam are, Nritta and Nritya.

Nritta: is developed and built on the vast network of adavus or basic units of movements. This aspect highlights the physical form of the dance. Danced to the recitation of rhythmic syllables known as jatis or to the singing of musical notes known as swaras, the dancer weaves linear, geometric patterns in space that are full of vitality and grace. The emphasis is on posture, balance, precision and rhythmic acumen.
Nritya: is developed and built on the Rasa Theory propounded in the Natya Shastra. The emphasis here is on feelings, sentiments and emotions. Rasa is a feeling or sentiment. The nine rasa or navarasa are the tools of learning that prepares the dancer to express the full range of human feelings and beliefs as explicitly or as subtly as the spoken word. This is one of the most defining aspects of Indian classical dance.

Given the precision and details of the dance, Bharat Natyam is as much a science as it is an art. It is considered an artistic yoga for revealing the spiritual through the physical, as dancers dissolve their identity into the rhythm and music of the dance, making their body an instrument for the experience of the soul. It is a Sadhana.

Sadhana is the Sanskrit word for discipline, dedication and commitment needed to obtain an outcome that is spiritually uplifting. A dance form of such detail, complexity and spirituality requires the level of commitment and dedication equivalent to Sadhana.